* How to pack a bike in a cardboard box? 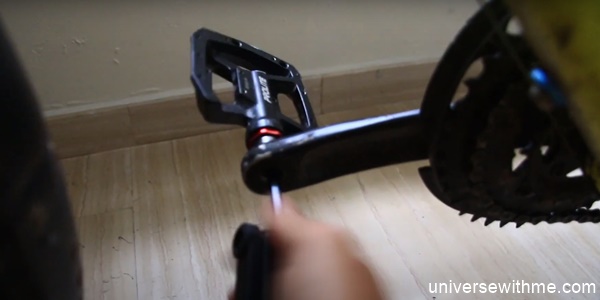 – If you didn’t remove them for a while, it can be hard. So put a bike oil at pedal screw a day before.
– Use 15mm wrench to remove the pedal directly or use an Allen key to remove it at the end of the pedal.
– Right pedals loosen by turning counter-clockwise, left pedals loosen clockwise 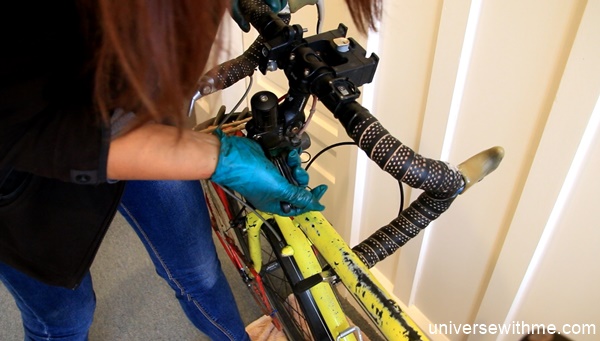 – Unscrew the stem, turn the handlebar by 90 degrees, and screw again to fix it.
– If the box is small, you have to remove the handlebar from the stem and leave it on the side of the frame carefully (parallel to the frame)
– In my experience, if I get the medium size of the box, I didn’t need to remove it. 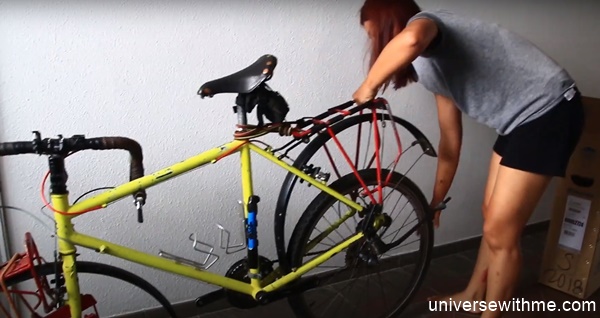 – Deflate the tires
– Remove the wheels
– Leave Quick release on wheels to avoid losing it.
– If the box is small, then remove quick release and put them all together in the small bag with tools and screws.

5. Put the frame first into the box

– If it doesn’t fit, then remove such as kickstand and racks one by one and test it. 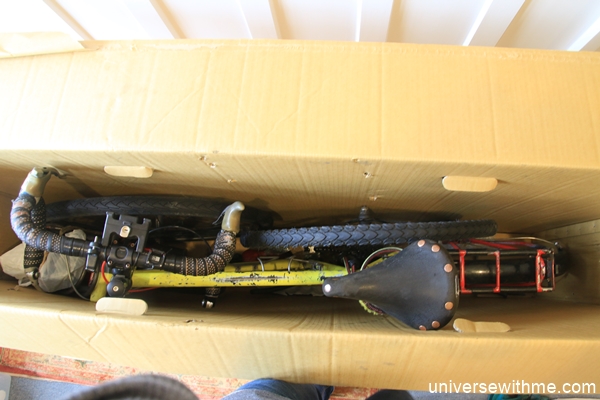 6. Put the wheels next to the frame.

7. Put tools, screws, and others into a small bag and fix it on a bicycle or box with a tie or tape. (Then you can install them easily later)

– Above the picture, you can see them on my white bag at my front rack, which I fixed it.

– When I pack my Surly Long Haul Trucker bike, lock, and tools together, it weighs 22kg (48pounds) included the box. 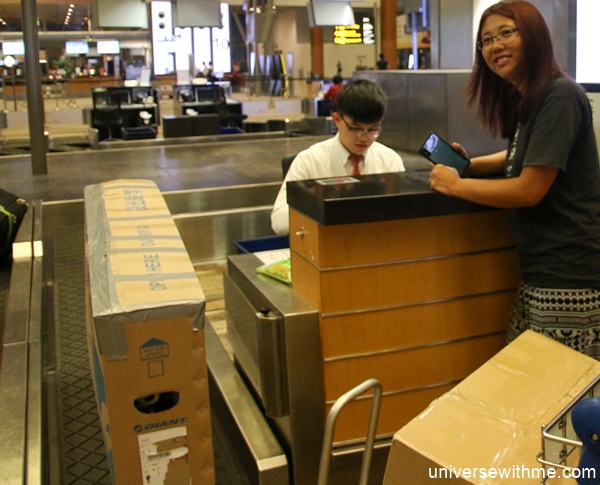 9. Use duct tape to seal tightly.

10. Write down Top, Bottom, and Fragile On the box

– Airline can provide you a free sticker of Fragile
(You can write down Fragile everywhere on the box to show them how much you love your bicycle so that they will try not to mess you up. And write down THANK YOU as well )

* How to use Packing service instead of doing it by yourself?

– You can go to a bicycle shop and ask them to do it (It can cost around $60~$100 in Europe, America, and so on)
– Some airport has packing service. So check them before going there.
– Korean Incheon and Gimpo airport has a packing service for $20-$40 and it will take 10 to 30 minutes.

* How long does it take time to pack it?

– If it’s your first time, it can take up to four to six hours. Be patient. You will get there. Trust me. I’ve done it, so you can do it as well.
– If you’ve done it a few times, it would take only one to two hours. (Professional can do it in 10 to 30 minutes. )
– Personally, I’ve spent more time on removing Pedals because I hardly remove them for one to two years that it’s stuck there and it makes me confused with counter-clockwise and clockwise. So let’s put oil there before.
– If the box is small, you have to remove the kickstand, rack, and so on one by one to test it, which will take more time.

– You can ask a bicycle shop.
– Not every bicycle has a box. So check before going.
– In my experience, it was free always, but probably some bicycle shops ask you for money to give it. 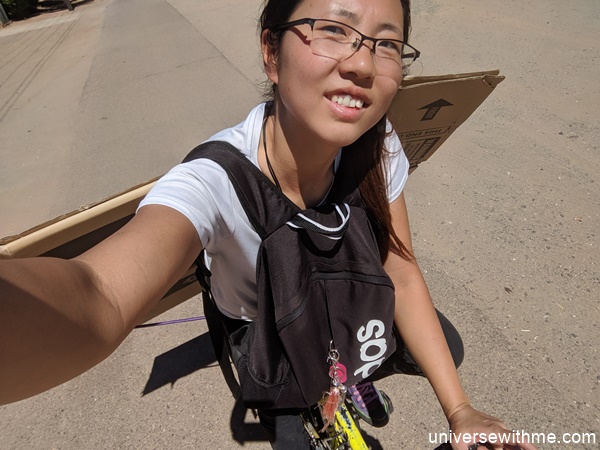 * How to bring a box into your home?

– You can fold the rear seat of your car and put the box.
– Carry a bicycle box on a bike. (You can fold it in half and carry it on the rear rack like on the picture of me. Even I carried it with standing up one time. You can do it if you need to do it.)

* How much does it cost to take a bicycle into an airplane?

– Every airline has different regulations that YOU MUST CHECK THE PRICE OF CARRYING A BIKE BEFORE BUYING FLIGHT TICKET. (Many airlines don’t show it clearly on their website. So you need to be patient to figure it out.)
– Usually, a long-distance flight allows you two 23 kg(50lb) luggage for free. (Usually only one 23kg(50lb) free. If it’s a very cheap flight, then only 7kg carry on baggage)
– Sometimes it’s just better to choose a direct flight than a few different stopovers as you have to pay for your bicycle to different airlines.
– I’ve paid one time $70 for carrying my bike. But it can go up to easily $100 to $200.

* Where do you install after landing?

– You can go to a quiet place at the corner of the airport and install it.
– Some airports provide a bicycle stand outside kindly like New Zealand.

* What to do with a bicycle box after finishing installing it at the airport?

– There are always cleaners walking around at the airport. So ask them what to do.
– In my experience, they always said leave next to the bin at the corner.

* Is it necessary to put it into the box for air travel?

– Every airline has different regulations, but mostly they require a cardboard box or hard bike box.


– Some airlines allow just wrapping or a soft bicycle box. (But it’s better to use a box to protect our lovely bicycle.)

– If you have a very expensive bicycle and round trip ticket, then buy Topeak pakgo for $1,100 (12kg)
(If you don’t have a bicycle costing $10,000 or if you don’t take the flight often, this isn’t necessary, to be honest as the cardboard box is strong enough to protect from the damage.)
– There are other cheaper ones

(The TOPEAK PakGo X video is so beautiful and the instruction is so clear. But it looks more complicated than putting into the box that I won’t buy a $10,000 bike.)

How to clean a bike chain? Here are 6 ways to clean. | Cycling Tip

Why I am not having Patreon

How To Use Liquid Stove, MSR Whisperlite International | Most Loved Stove among World Tour Cyclists

Ultimate Advice for Wild Camping on a Bike Tour

25 Ways To Make Money Online – I will Tell True Facts Which Other People Will Never Tell You!!!

I’ve worked hard to keep my blog
while cycling the world on the road for over 9 years.
Please support if you enjoyed my site.Thanks 🙂

Download My Apps For Your Fun 🙂
Don’t forget to give five stars
to encourage me to keep working.