I’ve cycled the world over 84,000 km on six continents since Sept 2011. I will talk about how much money you need to cycle the world with my own experience, other cyclist’s experiences I’ve heard from them, and internet research. 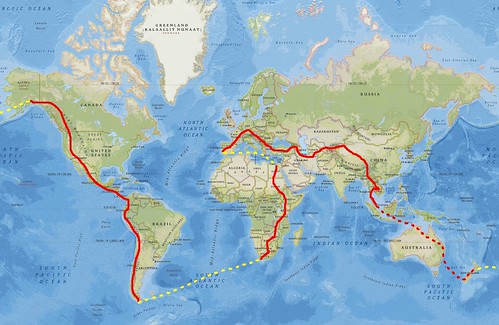 Usually, cyclists are following three main routes. Of course, you can travel in different ways. But I am talking about the general idea. When people do one of those routes, usually they say “I cycled the world” 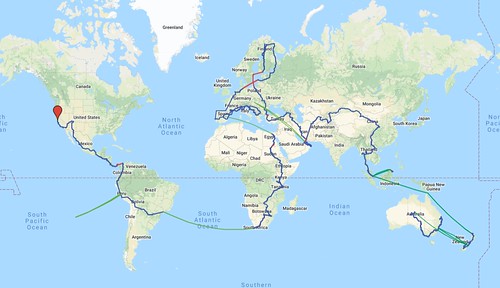 (This is my route)

* How long does it take time to do one of those?

Usually, it’s difficult to mix routes as crossing the ocean requires extra money, time, and courage to explore a new continent. The most common route is the first one, from Europe to Asia. The next popular one is from North America to South America. It doesn’t matter which route you cycle that the cost of travel doesn’t change much.

* Why traveling cost is not changed although it’s a different continent?

There are four main things travelers will spend money mostly. 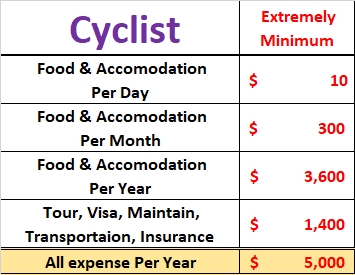 * So how much money do you need to cycle the world?

You need $300 USD minimum per month for mostly food and accommodation. That is 10$ a day, $3,600 a month. You need around $1,200 for tour, visa, maintain, transportation, insurance, and others. You need $5,000 a year minimum included flight to cycle on the one of three routes.

How about an Initial purchase?

If you don’t have any camping gear and bicycle, then you need to spend a minimum $2,000. I always think good camping gears are more important than expensive bicycle cause expensive camping gear can make your trip easier. But an expensive bicycle like costing $3,000 doesn’t change much. And this is not a race, so there is no point to cycle faster. If you have all gears already before starting, you might need to spend only $500 for extra stuff. I saw a few cyclists traveling with a real cheap bicycle that it’s possible to spend $500 for everything.

Total how much do you need?

You need at least $7,000 included gears and everything to cycle the world. I must tell that this is an extremely small budget and this is quite hard to survive. But still, it’s somehow fun and I see many people cycled the world with this small budget. 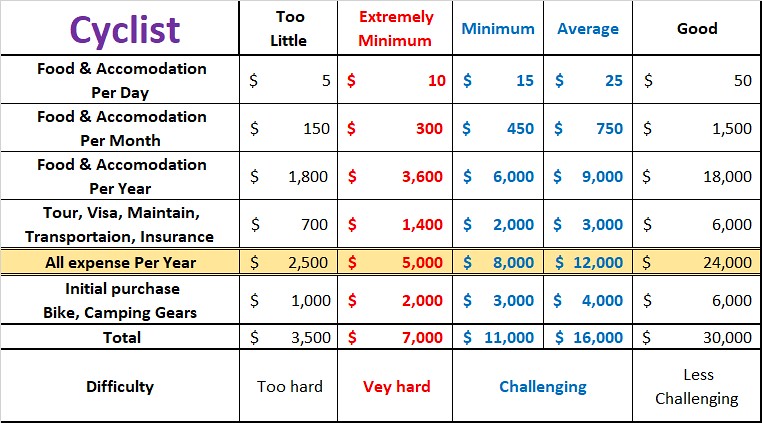 What kind of other budgets there are?

Some crazy people cycle the world with only $2,500 per year. I can’t imagine how it’s like to cycle the world with $5,000 was extremely hard for me. With $5,000 yearly budget, I could stay at a cheap hostel or hotel only sometimes. And I could get only $1-$3 meal that it’s very hard to go to a restaurant which costs like more than $10. For the tour, I had only one or two impressive things per year like visiting the Serengeti Safari tour for three days, $300. If you spend around $12,000 a year or more than that, your trip would become easy and you can try different dish at the restaurant around $10 meal. You can have different tours more. As you spend more money, your travel becomes comfortable.

How is different from the Backpacker budget?

If you want to travel the world with $5,000 as a backpacker, You have to be a hitchhiker. For a backpacker, the minimum budget is $12,000 as you have to take transportation all the time and pay hostels as you don’t carry camping gear. $24,000 is the common budget for a backpacker for a world tour.

As you see, the cycling world costs only half the price of backpacking as they save up on accommodations and transportation. 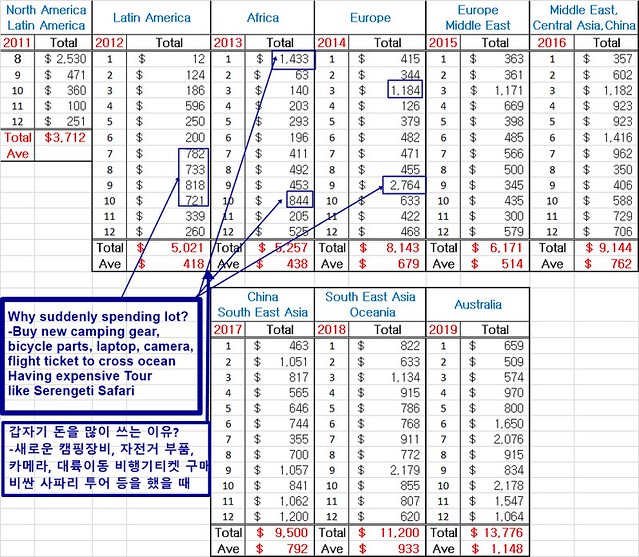 How is my own experience of the world tour?

This is my yearly expenditure. I didn’t get any money from my family. I’ve started with $10,000 which I made through Canadian Working Holiday Visa in 2011. I’ve spent only $5,000 in the Americas and Africa each year. I was really worried about surviving in Europe before going there because I thought it would be too expensive. As you see, I’ve spent more money in Europe. But the reason is that I’ve bought winter camping gear, new camera gear, front bag for $2,600. If I deduct this, I’ve spent only $5,500 for a year in Europe. So it’s the same as my first year in the Americas and my Second Year in Africa. In Europe, thank to cheap grocery stores like Lidl, Aldi, Carrefour, I could have many good cheap foods. Cycling in Europe was like going out picnic every day because of it. And obviously, it was way easier than cycling in Latin America and Africa for many other reasons.

Since 2016 I’ve spent more money cause I got tired of traveling with $5,000 yearly. And I realized I could make $200 to $400 per month by creating content regularly and it was increasingly little by little.

New Zealand and Australia are very expensive. I remembered that I was always hungry at the first month when I just came to New Zealand in 2018. I thought that I had a parasite on my stomach even. It was just so expensive to get things at the grocery store. If you have only $5,000 yearly budget without a working holiday visa, you need to think again about cycling in Oceania.

In 2019, I traveled six months and then worked six months with an Australian Working Holiday Visa. Once I stayed in one place for work, I’ve spent more money on renting, going out, and others. As the result, the expense was increasing.

There is one funny thing. I have more good memories when I traveled with $5,000 yearly because I got more chances to meet local people. Specially I was too scared to do wild camping alone for a few years that I always pitch my tent at local people’s property with permission. It made my trip rich with full of different stories. But I don’t think I can travel with that little budget again cause it’s really hard and I’ve done it already. Good luck if you want to try it.

Thank you so much for reading the post and I hope this post gives you an idea about the cost of cycling the world. If you have experience of a cycling trip, please share your expense on the below comment to help others. Thanks.

How to get grease off your hands | Bike Tip

Why I am not having Patreon

What to do when a dog bark and chase you? | Cycling Tip

How I afford to travel the world?

I’ve worked hard to keep my blog
while cycling the world on the road for over 9 years.
Please support if you enjoyed my site.Thanks 🙂

Download My Apps For Your Fun 🙂
Don’t forget to give five stars
to encourage me to keep working.

I’ve worked hard to keep my blog
while cycling the world on the road for over 9 years.
Please support if you enjoyed my site.
Thanks 🙂

[I pause the trip, and
studying and working as an app developer by myself
Please download my apps and
give five stars to encourage me! 🙂 ]